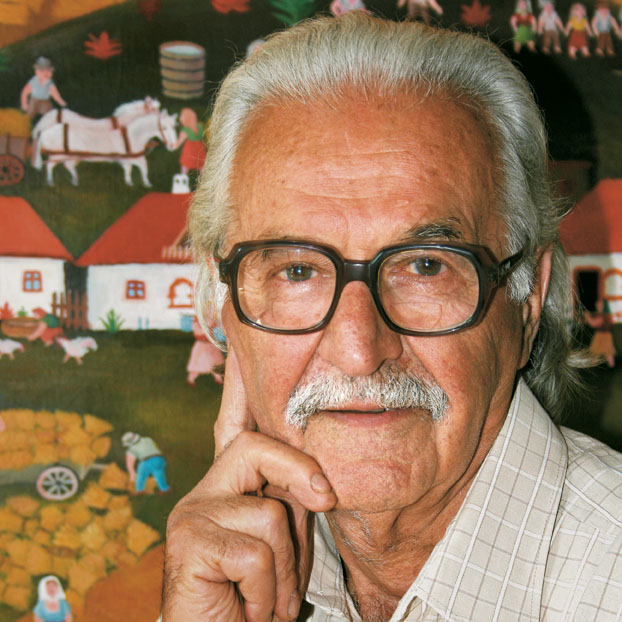 He was born in 1925 Gornja Trnava near Prokuplje. Completing his apprenticeship as a blacksmith in 1941, a year later he joined the resistance movement (National Liberation War), fighting until the end of the war. He began to paint in 1956. At first it was difficult, not knowing how to prepare his canvas or anything about technique. He first exhibited in 1959 in Belgrade, and in 1962 he became a member of the Gallery of Naive Art in Jagodina.

His strong emotions, quick changes of mood, Jevtović transferred to canvas. His brushwork is vigorous, expressive. He often paints directly without a sketch as the memories come to him.

The themes of his paintings focus on collective life in the village. Unlike his contemporaries, he paints a multitude of figures erupting, as it were, from the bowels of the earth.

Between the two extremes of his nature – tragic and joyful – which are reflected in his style, every detail has significance only within the context of the whole. He gives priority to the human figure, and also animals as companions or assistants in labour (horses). Architectural, floral elements may be only suggested, not of vital interest. He does not paint idyllic landscapes reminiscent of the Garden of Eden; for him nature has no significance without man.

At first he painted the interior of houses with women at work, or the interior of a smithy. He insisted on proportion, planes and figures. The range of color is impressive, strong colors sometimes emphasizing details. In the following phase the figures are disproportionate, and faces show the artist´s interest in their individuality. There are already indications of his later use of hemispherical hills. He gradually develops his idea of placing a large number of figures in a small space so typical of his later period.

“Systematized in groups, simplified miniature figures of peasants are shown in simultaneous movement. People making ecstatic gestures seem to be performing some strange ritual. Hovering beneath somber or often ruby-red skies are dragons and magical white horses: a kind of totem of our peasant, so familiar and yet misunderstood.

Bringing in the hay, harvesting, wedding processions, fairs – everywhere peasants are participating, full of life and humor, vigorously gesticulating; we seem to hear the sound of their voices.

Other aspects of life, which may threaten the peasant and is existence, natural disasters, for example, are also recorded in the artist´s opus. During his lifetime Dušan Jeftović has often attended human dramas (beginning with war). These scenes symbolize fear, panic, helplessness, the struggle for survival.

He also associates his peasants with traditional religious rites. With a certain amount of irony but not ridicule, Jevtović looks on their superstitions and belief in magic, painting them as such.

His brush is brisk, hence the absence of details and precision of drawing. His figures are fixed in ecstatic movement, fullness of form emphasized. The contrasts of complementary colors add volume and dynamism with innumerable actions, given simultaneously, setting up a rhythm.

Quality can be maintained only by a powerful artistic soul such as Dušan Jeftović, his name engraved at the very peak of Serbian naive art.

Prompted by social change, economic development and the mass media, the rural population began to migrate to the suburbs and towns, a process that affected Miroslav Jovanović and Dušan Jeftović and other artists. Study of their work leads too interesting conclusions. Under the influence of urban culture, naive art, which had begun in the village, gradually changed in form, content and technique. The new environment offered artists many opportunities but in return deprived them of their authenticity. Alone and unadapted, these artists searched in their new surroundings for what they had lost (Đorđe Dobić, Gordana Djelošević and Eva Ras came from an urban environment, so their observations are quite different).