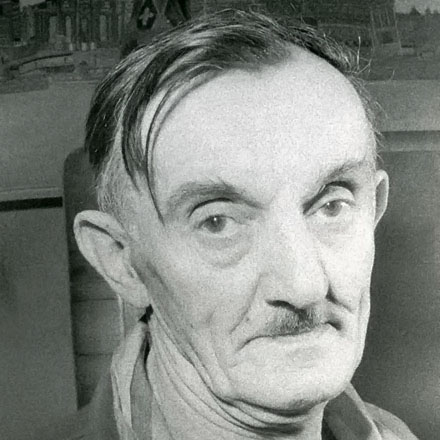 In Hungarian family in 1894 was born Emerik Feješ. In his life he moved several times from city to city in Croatia, Hungary and finally settled in Novi Sad Serbia where he has died in 1969.

Throughout his life Feješ suffered from asthma and sciatica, which kept him bed-ridden for increasing periods of time. He was a dreamer with enormous need to paint. He was painting at night until the early hours, imagining he travel to distant cities we had never seen. He started to use postcards as models. Painting, which he discovered in 1949, and his expanding postcard collection were ways to keep himself entertained, although his wife felt this was an extravagance.

Feješ painted images of cities and their architecture based on what he knew of the world from his postcards. He did not, however, slavishly reproduce what he saw in the photographic images. Instead, wearing two pairs of glasses as a magnifying aid, he would enlarge the scene, changing colors and adding details at whim. He used matchsticks instead of brushes and relished bright colors, keeping his paints in beer bottle tops.

He died in 1969, leaving behind many buttons and combs, and hundreds of pictures, which are much admired for their lack of inhibition, universal appeal and synthesis of human values.