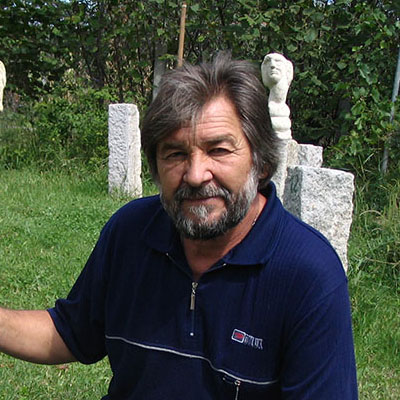 He lives in Stepojevac near Belgrade. A sculptor since 1966 he has participated in one-man and group exhibitions.

Ilija Filipović works in sandstone, though he began with wood. He generally chooses small pieces, but also larger ones depending on the subject (portraits, phantasmagorical compositions). His phantasmagorical compositions are the consequence of his meditations on the eternal questions of life, the distant past. Filipović was born near archaeological site of Lepenski Vir, and the specific features of this myth have influenced the artist’s character and work. Filipović uses the half-man-half-fish figure excavated at Lepenski Vir and its symbolism for the artistic transformation of his idea.

Apart from these strange creatures there are serpents, birds, fish, people, figurative compositions worked into elaborate arabesques. His free-standing, three-dimensional works are simple, closed forms, often occurring in nature. He works with hatchet and chisel, the primary surface framed by the hatchet, the difference between the primary and secondary surfaces so small that the sculpture becomes a very shallow relief. The nose, mouth and eyes project from the face. Besides sculpture, Filipović also sketches, his drawings characterized by a subtle web of lines (linear arabesques) with forms and scenes suggesting universal symbols of existence.