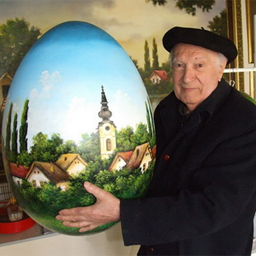 Among the numerous painters of Vojvodina Sava Stojkov is distinguished by characteristic style and strong individuality that have earned him special place in Serbian naïve art. He began painting is 1942.

Attached to the wide plains of Bačka (part of Vojvodina, Serbia), to his birthplace Sombor, its surroundings and people, he interprets his observations of life and the world in paintings where the leitmotif is always his broad Vojvodina.

In the iconography of his paintings there are few ventures into history. He was travelling through the countryside, often using the same or similar compositions in his paintings. Farms barns, old fences and gates, livestock and poultry, other details all contribute to the portrayal of rural Bačka.

Sava Stojkov was neither a philosopher nor a man of letters. He was genuine, lyrically inspired artist. His paintings have aroused considerable interest in Serbia and abroad, as we can see from his numerous independent and collective exhibitions and awards. Several thousand paintings that Sava Stojkov has bequeathed to us over more than seventy years of artwork prove him as person of poetic individuality and style, who enjoys an important place in naïve art.