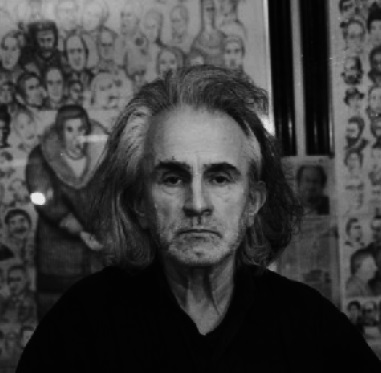 Born in 1932 in Golem Radobilj, Macedonia, where his father worked as a priest, in a severe, religiously devout Serbian Orthodox family. While still a child, he suffered the successive loss of his older sister and younger brother. Around 1935, his family settled in Despotovac, Serbia, where he would spend most of his life.He moved to Belgrade, the capital of Serbia, in 1952 to take drawing and sculpture classes, but feeling disappointed and marginalized, five years later he returned to Despotovac to his mother’s home. He married briefly in 1962, but the marriage dissolved and he returned to live with his mother.

That strange, black man, as they used to call him because he permanently wore black, drew attention like unpleasant conscience, a personification of an outcast, a betrayed, while his anthropomorphic and zoomorphic forms exuberated under the radiation of human animosity.

Strong linearism of hallucinate, multiplied texture without a beginning and an end creates unique atmosphere where the powerful presence of the artist’s sensuality and agony is felt. Tubular forms of organic ornaments create unique arabesques abundant with optical effects, either pulling the form deep, or drawing it from a flat surface. Jakić used allegory, a symbol and a metaphor as a means of contemplation, he most often worked in Indian ink, felt pen and less frequently used color, pastel or gouache. In addition to drawing, he wrote a conclusion as a supplementary media in order to emphasize his observation with the use of a written text.

Though Jakić did receive some limited training in his youth, the primarily naive, intuitive, bizarre, pathological, and visionary nature of his style has led to him being classified as an outsider artist and to his body of work falling under the umbrella of art brut, he is a world classic.